Jo and I used to be avid campers. Now with a busy life and a large slab of our holidays being taken up with visiting a caravan which is left by the beautiful Port Phillip Bay for three months in late Summer and early Autumn, we don’t tend to go camping anymore. We are also no longer that keen on sleeping on the ground. Early this year we purchased a teardrop caravan. It’s basically an insulated double bed on wheels with a kitchen at the rear. Well, firstly Rosebud, then medical issues, then our trip to Italy; this weekend seemed a perfect opportunity to use our little teardrop. The post is not really about the teardrop, but returning to camping. Here’s a photo of me at the rear of the teardrop on Friday.

First of all, we have had a very wet Spring, and as soon as we stepped out of the car we were swooped upon by hundreds of mosquitos. Well our friends saved the day with Aerogard, which they hadn’t forgotten, because they wanted to avagoodweekend (for Aussies). We ducked down the supermarket later and they were sold out. The chemist had some super-dooper 4% DEET aerogard for quite a hefty price. We snapped it up.

The first Tuesday in November is Melbourne Cup Day. A crazy long horse race that any horse can win. We get a public holiday for it! Many folks have Monday off to make it 4 days. I had Friday as well to make 5. We were visiting Maldon, in the Central Highlands of Victoria, for Jo to perform in the Maldon Folk Music Festival, and for me as an audience member. Maybe I will write about the festival at another time.

Well secondly, you need to stock up with food and ice before you come, as it is quite dear in a festival town (I did not forget beer). Thirdly, it is Spring; bring clothes for all seasons. It was hot and freezing cold, wet and dry and calm and very windy, all in a period of four days. Bring enough plates and glasses and….oh do I have to go on? It’s obvious we had forgotten all the things we used to collect with our eyes shut when we were younger. I also manage to burn the tops of all my fingers in stupid metho stove incident. I ‘ll have that reminder for a few weeks. I’m lucky it wasn’t worse.

Look it didn’t matter so much, because the festival had great food laid on at fair prices. We had a counter tea one night. And what’s more they had shuttle buses running from the campground to the town centre every 10 minutes, which were all part of the ticket. And a big shower toilet block on a semi-trailer. The music was an absolute joy. Jo’s choir did really well too.

The land where we were camping is very harsh land. Dry trees, rocks and no topsoil. Normally such a pain to be hammering pegs into. Not this weekend; soft as, due to the rain. 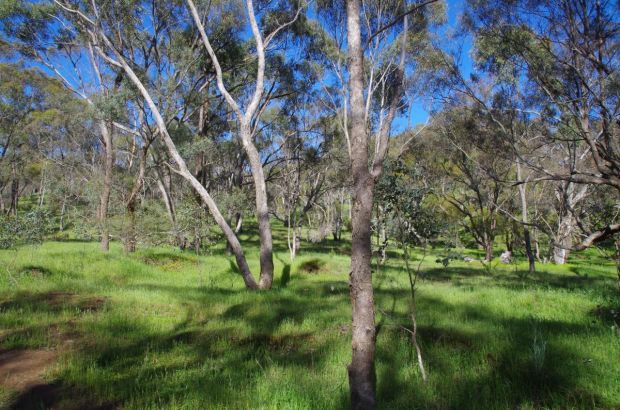 But hidden in the grass is thousands of hungry mozzies. Regardless, is was so beautiful and quiet. I’ve been told it is not always so. Some weekends this area is descended upon by 4WD and trail bike enthusiasts. Here is some pictures showing you what they do to the bush, apart from filling it up with noise. No offence intended for 4WD friends out there. I know you are respectful of the bush. 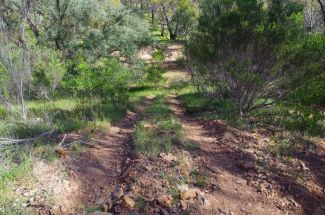 Alternative track, made because the other two had become unnavigable 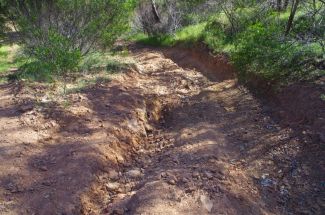 One thing I did remember was to never camp on top on one these. An ant nest.

Only a few on the surface. I did not want to stir them, so I took this pic from a distance. 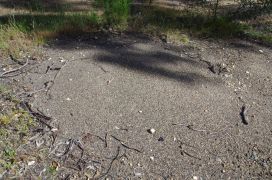 I’ll leave you with a wet dry land panorama of the bush above our camp. What a lovely weekend.

Post note: It has been pointed out to me that I over stated the negatives of this trip and thus implying that we may not have had a great weekend. There were only two things that were not so good about this weekend. Burning the back of my hand, and being chastised for talking in the Troubadour tent while a show was on by a bossy audience member. It was bit like being back at school, because I wasn’t talking, it was someone on the other side of the table who she could not see! Anyway, I have a thing about blowing your own trumpet, and tend to do the opposite too much.